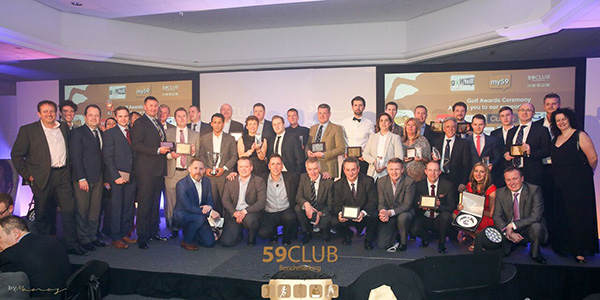 In glittering style, the 7th annual ‘Service Excellence Awards Ceremony’, hosted at The Belfry Resort on February 27th 2017, paid tribute to 59club’s top performing client clubs. It comes as no surprise that those honoured, and present on the night, are regarded as some of the very best clubs and resorts in golf, as they consistently strive to achieve ‘service excellence’.

The awards are designed to recognise the top golf venues across all business elements - sales, service, operations, retail, golf course, food & beverage and management - based on the actual scores they receive as part of the benchmarking process. Audits include a series of mystery calls and visits from a trained 59club tester, who evaluates the experience afforded to both visiting golfers and prospective members, all in accordance with 59club’s detailed and non-subjective benchmarking criteria.

The climax of the night for many is when the 59club Industry Benchmark - the Gold, Silver and Bronze Flag Awards - are bestowed on the finest member clubs and commercial venues, that not only achieve the required standard of service as part of the benchmarking criteria, but also provide excellent facilities for golfers to enjoy.

Six ‘Silver Flag’ winners were announced on the night, these included Alcanada; The Belfry and The Mere in the Resort category. Gullane; Roehampton and Woodhall Spa received Member Club ‘Silver Flag’ status.

To ensure venues of all sizes are recognised for their outstanding levels of achievement, 59club introduced two categories for selected individual and team awards, thus segmenting clubs who charge an average green fee of either above or below £75. This ensures clubs of all sizes and budgets have the chance to receive the credit they deserve, based on the market segment they have chosen to compete in.

The Grove, London’s Country Estate and one of the UK’s finest golf destinations, scooped one of the highest prized awards of the evening, earning them the enviable title - ‘The Ultimate Golf Resort’.

Anna Darnell, Director of Golf & Resort Experiences at The Grove, commented: “It is an honour to receive an award that underlines our commitment to five-star customer service. It is also testament to our highly-professional, dedicated team who work tirelessly to ensure every guest receives a first class experience.”

Dubai Golf – who manage two of the leading golf clubs in Dubai, the Emirates and Dubai Creek – shone on the night, as they claimed an impressive six service excellence awards. In addition to their two Gold Flags, they also saw Craig Haldane (Emirates) hailed ‘Greenkeeper of the year’ and Barney Coleman (Emirates) ‘Golf Manager of the year’, both within the over £75 green fee category. Dubai Golf were awarded Golf Group of the year and finally the Emirates went on to be crowned ‘The Ultimate Members Club’.

Christopher May, Chief Executive Officer, Dubai Golf said: “At Dubai Golf our mission is to exceed Customers’ expectations through consistent service excellence, this is achieved through our colleagues making a difference and delivering memorable moments for each and every member and guest that we host. The 59club audit process has been instrumental in developing and monitoring our performance, this, teamed with the training 59club have developed, has undoubtedly assisted us to make this happen.”

The Marriot Golf Group was also left revelling on the night as they too received six awards. The Forest of Arden received ‘Silver Flag Status’ and ‘Golf Sales Team of the year’. Breadsall Priory claimed ‘Bronze Flag’ Status whilst Debby Hollis received the ‘Leading Individual Golf Membership Performance’ award. Their track didn’t stop there, as Adam Moule, (formally) Worsley Park, received the title ‘Golf Manager of the year’ and the team at Worsley went on to win the ‘Golf Operations Team of the year’ award, both within the under £75 green fee category.

Other venues celebrating on the night were newcomers Louth Golf Club who put in an excellent performance during 2016, and as a result saw Nick Taylor crowned ‘Golf Retail Manager of the year’(<£75). Another newcomer, Yas Links, achieved both ‘Gold Flag’ status and saw Mohamed Hidhayath claim ‘Food & Beverage manager of the year’ (>£75). Rockliffe Hall were honoured with two awards as Davy Cuthbertson and Jon Wyer claimed the ‘Greenkeeper of the year 2016’ (<£75) whilst the Resort itself was further acclaimed with ‘Gold Flag ’ status.

Simon Wordsworth CEO at 59club, “The night was a credit to our partners and client clubs who have embarked on the journey to improve industry standards with us. These clubs have the competitive edge and naturally reap market advantage. The proof is in the results, and that’s what 59club give you – real honest benchmarking statistics, teamed with training support which ultimately assists clubs to advance. Success stories are evident at each and every club we are fortunate to work with – big and small. It’s only when you begin to appreciate how good or bad you really are that you can work to excel. I am delighted to congratulate every club we work with for their dedication and unerring desire to provide only the very best in service across all spectra.”

You can view (and download) all the photos taken on the 27th by going here.

If logging in for the first time use the password listed within your welcome email
Logged in!
Incorrect email/password. Please try again.
Click here to contact us if you are having problems logging in.

Enter a few details below and we will contact you to complete your order
Your details were successfully submitted. You will shortly receive applicable payment terms.
Your details could not be submitted. Please complete all required fields below and try again.

Book your place on a my59 webinar